First you will feel nauseous. Your vision becomes hazy. Within seconds you are blind. You lose your sense of touch. You cannot speak or swallow. Three minutes later you are paralyzed and unable to breath.

You knew that the blue-ringed octopus is extremely poisonous but how were you to know that this was one when its tiny parrot-like beak bit through your wetsuit. The last thing the victim sees are the blue rings – visible only when it is about to attack.

The blue-ringed octopus is the size of a golf ball but its poison is powerful enough to kill an adult human in minutes. There’s no known antidote. The only treatment is hours of heart massage and artificial respiration until the poison has worked its way out of your system.

The poison is not injected but is contained in the octopus’s saliva, which comes from two glands each as big as its brain. Poison from the one is used on its main prey, crabs, and is relatively harmless to humans. Poison from the other gland serves as defense against predators. The blue-ringed octopus either secretes the poison in the vicinity of its prey, waits until it is immobile and then devours it, or it jumps out and envelops the prey in its 8 tentacles and bites it.

There are two species of blue-ringed octopus: the Hapalochlaena lunulata, which is the larger and grows up to 20 cm (8 in) across its stretched tentacles. The other, the Hapalochlaena maculosa, is small and more common, weighing a mere 28 grams (1 oz). They are found in the shallow coral and rock pools of Australia. And they’re rather cute, being brown or yellow in color. But don’t pick one up – by the time you see the electric-blue rings, it’s too late! 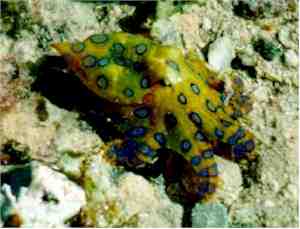 The tiny blue-ringed octopus
– the blue rings are visible only when it is about to attack.

Brown or yellow in its natural state
– you won’t see the blue rings until it is too late.

It starts life the size of a pea and is fully grown at about the size of
a golf ball – but carries enough poison to kill 26 adults within minutes.