Home » history » The history of radio

The history of radio

Twenty years after the telephone was invented and music was first sent down a telephone line, Guglielmo Marconi sent radio signals.

Marconi (1874-1937) was born in Italy and studied at the University of Bologna. He was fascinated by Heinrich Hertz’s earlier discovery of radio waves and realized that it can be used for sending and receiving telegraph messages, referring to it as “wireless telegraphs.”

Marconi’s first radio transmissions, in 1896, were coded signals that were transmitted only about a mile (1,6 km) far. Marconi realized that it held huge potential. He offered the invention to the Italian government but they turned it down. He moved to England, took out a patent, and experimented further. In 1898 Marconi flashed the results of the Kingstown Regatta to the offices of a Dublin newspaper, thus making a sports event the first “public” broadcast.

The next year Marconi opened the first radio factory in Chelmsford, Essex and established a radio link between Britain and France. A link with the USA was established in 1901. In 1909 Marconi shared the Nobel prize in physics for his wireless telegraph. Marconi became a wealthy man. 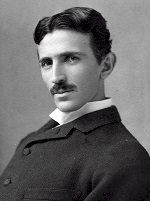 But Marconi’s wireless telegraph transmitted only signals. Voice over the air, as we know radio today, came only in 1921. Marconi went on to introduce short wave transmission in 1922.

Marconi was not the first to invent the radio, however. Four years before Marconi started experimenting with wireless telegraph, Nikola Tesla, a Serb who moved to the USA in 1884, invented the theoretical model for radio.

Tesla tried unsuccessful to obtain a court injunction against Marconi in 1915. In 1943 the US Supreme Court reviewed the decision. Tesla became acknowledged as the inventor of the radio – even though he did not build a working radio.

There are other claims to the throne of radio inventor. 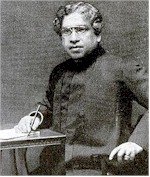 Indian scientist J.C. Bose demonstrated the radio transmission in 1896 in Calcutta in front of the British Governor General. The transmission was over a distance of three miles from the Presidency College and Science College in Calcutta. The instruments (‘Mercuri Coherer with a telephone detector’) are still there in the science museum of the Calcutta University. Thus writes contributor Dipak Basu, referencing the Proceedings of the IEEE, January, 1998.

Bose repeated his demonstration in the Royal Society in London in 1899 in the presence of Lord Rayleigh (Nobel prize winner in Physics, 1904), J.A. Fleming (Professor at London university and later an advisor to the Marconi company), and Lord Lister (President of the Royal Society). As a result he was offered Professorship in Cambridge, but declined.

Bose had solved the problem of the Hertz not being able to penetrate walls, mountains or water. Marconi was present in the meeting of the Royal Society and it is thought that he stole the notebook of Bose that included the drawing of the ‘Mercuri Coherer with a telephone detector’. Marconi’s Coherer, which he used in 1901, was the exact copy of that of Bose. Apparently Marconi was unable to explain how he got to the design. He said that an Italian Navy engineer called Solari had developed it, but Solari later denied it. Marconi then said that Italian Professor Timasina did, which later was exposed as a lie by another Italian professor, Angelo Banti, who claimed that the design was invented by signalman Paolo Castelli.

Bose did not apply for a patent on his design because he believed in the free flow of inventions in science. But under pressure from American friends, he applied for the patent in September 1901. He was awarded the US patent for the invention of the radio in 1904. By that time Marconi had received his patent and international recognition. 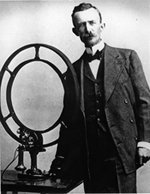 It is reputed that Nathan B. Stubblefield, a farmer from Murray, Kentucky, made a voice transmission four years before Marconi transmitted radio signals.

In 1892, Stubblefield handed his friend Rainey T. Wells a box and told him to walk away some distance. Wells said later: “I had hardly reached my post.. when I heard I heard HELLO RAINEY come booming out of the receiver.”

Stubblefield demonstrated his invention to the press in 1902 but, being afraid that his invention will be stolen, never marketed his wireless radio. When he was found dead in 1929, his radio equipment was gone.

Nikola Tesla remains acknowledged as the inventor of the radio.

Even though it was once predicted that radio has no future, today there are more than 33,000 radio stations around the world, with more than 12,000 in the US alone. Worldwide there are more than 2 billion radio sets in use, or about one radio for every 3 persons; proof that video never killed the radio star.