In 1963, baseball pitcher Gaylord Perry remarked, “They’ll put a man on the moon before I hit a home run.” On July 20, 1969, a few hours after Neil Armstrong set foot on the moon, Perry hit his first home run of his career (while playing for the San Francisco Giants).

Perry actually achieved his first home run within minutes after Apollo 11 touched down on the moon but Neil Armstrong would step onto – with his left foot first – the lunar surface only 6 hours and 16 minutes later. 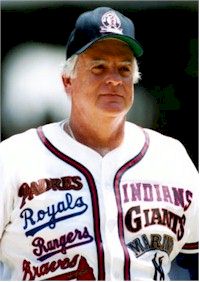 But while the timing of Perry’s first home run is well proven the fact that Perry himself uttered those famous words are not. It is also suggested that his manager Alvin Dark suggested, “They’ll put a man on the moon before he hits a home run.” Whoever said it, it has become one of the most famous moments in baseball history.

Gaylord Jackson Perry (born 1938), a right-handed pitcher, was known for allegedly throwing spitball. He pitched 5352 innings with 3534 strikeouts and ERA of 3.10. He scored 6 home runs in his career.

He made his MLD debut on April 14, 1962 for the San Francisco Giants and played his final professional innings on October 2, 1983 for the Kansas City Royals.

Perry was inducted into the National Baseball hall of Fame in 1991.