Worldwide, 20,000 brands of beer are brewed in 180 styles, from ales, lagers, pilsner and stouts to bitters, cream ales and iced beers.

Beer has been a popular beverage for a long time. Babylonian clay tablets show detailed recipes of beer making in 4300 BC. Beer was also brewed by the ancient Chinese, Assyrians and Incas.

An Egyptian text of 1600 BC gives 100 medical prescriptions using beer. A few years ago, the New Castle Brewery in England brewed 1,000 bottles Tutankhamun Ale from a 3,200-year old recipe found in the sun temple of Queen Nefertiti.

Commercial beer making was established in 1200 AD in present-day Germany. In 1506, the German Purity Law is issued, specifying that beer ingredients must only be water, barley, wheat and hops. Bottling of beer started in 1605.

Making beer
Brewing is the process of changing water and grain into beer through a yeast catalyst. The quality of the water is extremely important. Hard water produce a bitter ale, soft water produce bitter lager. Barley or hops, or a combination of them, is used for the grain.

Getting dry grain ready for fermentation is called malting. The grain is steeped in water until it sprouts. The sprouting or germination is not allowed to end naturally but is interrupted either by drying or roasting in kilns.

Barley
Barley has been a grain of choice for thousands of years. The longer the roasting of the malted barley, the darker the beer. Barley, or wheat beers have a sweet taste.

Hops
Hops are herbaceous climbing vines and look like a cross between pine cores and artichokes. The bitter, dry flavor of hops counterbalance the sweetness of malt.

The beer making process starts by germinating the grain, then steeping the resulting malt in hot water to get the wort. Base wort contents means the percentage of wort in the beer before fermentation. The alcohol contents is roughly one third of the base wort contents.The wort is boiled (brewed) and hops are added. After brewing, fermentation starts by adding yeast. After fermentation, the wort is drown into tanks where it is allowed to condition or age. Yeast and hops are sometimes added in a secondary fermentation process.

Ales usually are heavily hopped, and include bitters, brown ales, cream ales, mild ale, pale ale, India pale ale, barley wine and several other types. There are two types of the aboriginal ale still brewed in Europe. They are Belgian “lambic” and Finnish “sahti”, which is brewed from rye malt. They are brewed on wild yeast and spontaneous fermentation. Both have very distinct tastes.

The word “lager” is German and means “storage”, which refers to the lager (storage) fermentation. The main fermentation of both ales and lager are done on the similar temperature for 7-14 days. After that time the ale, depending on the type, may be ready for bottling. With lagers, this is only the start. After the main fermentation the beer is pumped into lager (storage) tanks with temperature some 10 deg C lower than room temperature. It is then let to mature and ferment for several weeks, usually 6-10 weeks. At 270 days, the longest lager fermentation is for that of Budejovicky Budvar brewery’s Bud Strong. 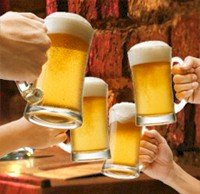 Best taste
The best taste usually is acquired at an alcohol contents of 4.7% ethanol per volume. Less than that results in a beer with a bland taste. More than that and the higher alcohols (butanol, pentanol etc) become overpowering and spoils the taste.

Ice beer is produced by freezing the brew and filtering the ice crystals, increasing the alcohol content. This process was already known in the Middle Ages to “cold-distil” brandy from wine, and the ancient Chinese produced rice hooch that way. The Canadians adopted the cold-distillation method for ice beer.

Beer factoids
The oldest brewery in Munich, the Augustiner brewery, was founded in 1294, when, on the order of the bishop of Freising, an Augustinian monastery was established at the Haberfeld, just outside the gates of the city. Munich was famous for its breweries operated by monks.
A true pilsner comes from the Pilsner, Czech Republic. The original pilsner was Pilsner Urquell (Plzensky Prazrod), meaning “The Original Spring of Pilsen.” It still is one of the most popular pilsner in the world.
The first beer brewery in the US opened in Manhattan in 1623. But the oldest continuing brewery, running since 1829 is Yuengling in Schuylkill County in Pennsylvania.
The first Octoberfest was held in 1810 in Munich, Germany. It started as a wedding celebration.
Löwenbrau of Munich was founded 1373.
The Czech Republic has the highest per capita beer consumption in the world, at 155 litres (40 gal).
Sake, the Japanese rice brew, is closer to beer than wine by its production method.
The English word “brewer” refers to a male beer-maker; “brewster” to a female.

International Beer Day is celebrated on the first Friday of every August.

Many thanks to Susanna Viljanen of Finland for contributing to this story.