Home » literature » Gutenberg and the history of the printing press

Gutenberg and the history of the printing press

Even before printing books from movable type, the Chinese used wooden blocks to print Buddhist writings by hand on scrolls. Chinese writer Fenzhi mentioned in his writings Yuan Xian San Ji that woodblocks were used to print Buddhist scripture during the Zhenguan years (627-649 A.D.).

The oldest known surviving woodblock-printed work is a Buddhist scripture of the Chinese Wu Zetian period (684-705 A.D.) discovered in 1906 in Tubofan in the Xinjiang province of China.

Printing is considered one of the four great inventions of China; the other being the compass, gunpowder and paper. While there are no surviving examples of the Chinese printing presses of the 11th Century, the oldest surviving dated printed book on record is the Buddhist Diamond-Sutra, dated 11 May 868 AD.

Park Gi Tae from VANK (Voluntary Agency Network of Korea) contributed as follows: The Jikjia Buddhist doctrinal book called Jikjisimcheyojeol or “Jikji in short form is the oldest book made by metalloid type. It had been made in 1377, 78 years earlier than “the Bible in 48 lines” made by Gutenberg.

However, recent excavations at a Korean pagoda have unearthed a Buddhist woodblock text even older than the Diamond-Sutra. Known as “Mugu jeonggwang dae darani-gyeong” it is dated to 750-751 AD.

Gutenberg was unaware of the Chinese and Korean printing methods.

In 1450, Gutenberg went into partnership with the wealthy Johann Fust and Peter Schffer. In 1454, Gutenberg printed a Turkish calendar and the famous 42-line Bible, of which he printed some 180 copies. The next year he quarreled with his partners, they won a lawsuit against him, and he lost control of his printing business, causing him financial ruin.

After his financial ruin, little is known of Gutenberg. Near the end of his life, the elector Adolph von Nassau took pity and made him a member of his court. He died in Mainz in 1468.

Although Gutenberg did not invent printing, his experiments made printing more practical. He used sand molds to cast his type and changed the woodcut presses to take printing of type pages. He did invent movable type for the Western world. Gutenberg’s method of using type endured almost unchanged for five centuries. Today he is the most famous printer of all time.

Before Johannes Gutenberg invented his printing press in 1454, there were only about 30,000 books throughout the whole of Europe, nearly all Bibles or biblical commentary. By 1500, there were more than 9 million books. Today there are more than a trillion books. 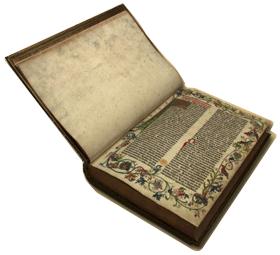