Home » did you know » Human bones for furniture

The characters in the movies Psycho and Silence of the Lambs are based on a real person, Ed Gein. He died on July 26, 1984 of respiratory failure in the Mendota Mental Health Institute, Wisconsin. His victims were not so lucky. Ed was a grave robber who had developed a taste for slicing up people. He murdered his victims, cut them up, and then used their bones to make furniture. When caught in 1957, his room featured lampshades and chair seats made of human skin. 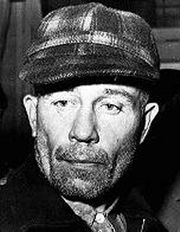