The 24 charges against Rod Blagojevich

The FBI has been investigating Rod Blagojevich, the former Governor of the State of Illinois, since 2005. Blagojevich was removed from office in January 2009 and indicted in April 2009.

The charges centered on allegations that he tried to “sell” the Senate seat left vacant by Barack Obama. The federal agents recorded Blagojevich saying, “I’ve got this thing, and it’s f*ng golden. I’m just not giving it up for f*ing nothing.”

In politics it is referred to as a Pay-to-Play scheme.

The 24 charges against Rod Blagojevich: 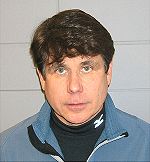 On August 17, 2010, Blagojevich was convicted of only 1 count of lying to federal agents, with a retrial being seeked by public prosecutors.

Source and more about the Blagojevich charges: TalkLeft – The Politics of Crime.