Home » did you know » The middle finger and the fricative F

The middle finger and the fricative F

Before the Battle of Agincourt in 1415, the French, anticipating victory over the English, proposed to cut off the middle finger of all captured English soldiers to prevent them from drawing the renowned English longbow in the future. The famous weapon was made of the English Yew tree, and the act drawing the longbow was known as “plucking the yew,” or “pluck yew.”

To the embarrassment of the French, the English won the battle and began mocking the French by waving their middle fingers, saying, “Pluck yew!” The letter “F” later crept into the symbolic gesture known as showing the finger or the highway salute – the universal sign of disrespect – because of the difficulty in pronouncing consonant clusters. 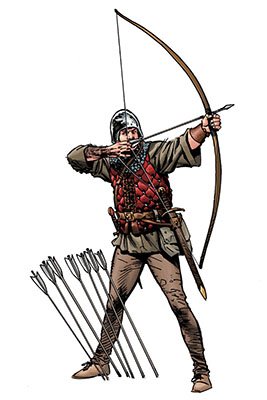 To get the feathers for the longbow arrows, one would have gone to the village plucker with the introduction “pleasant person pheasant plucker.” The result was the change of the letter P to a labiodental fricative F.

Or so it is told. There actually are records of the finger sign being used in ancient Roman writings and a reference in an ancient Greek comedy as a gesture of annoyance or insult.

Although the two-finger V for Victory sign – shown with the palm turned outwards – is synonymous with Winston Churchill, it actually was the idea of a Belgian politician, Victor Auguste De Laveleye. At the beginning of WWII, in a radio interview, he urged the British public to chalk the letter V on all public places as a sign of confidence in ultimate victory. De Laveleye took refuge in England, where he became director of the Belgian French-speaking broadcasts on the BBC 1940 – 1944. The idea of V for Victory was then promoted in all BBC foreign language programs  and, of course, much used by Winston Churchill.

Video: History of the Longbow