Home » did you know » Modern toilet invented by watchmaker

It is often incorrectly quoted that the toilet was invented by a Mr Thomas Crapper in the 18th century. Actually, simple toilets have been used since Babylonian times. In 1596, John Harrington invented an indoor water closet for Queen Elizabeth I. But Harrington then published a book with tasteless puns about his own invention. The toilet then dropped into obscurity for nearly 200 years. In 1775, London watchmaker Alexander Cummings patented the forerunner of today’s toilet. the standard flush toilet.

The mentioned Mr Crapper happened to be a successful plumber, appropriately. He founded the Thomas Crapper & Co and while he did not invent the flush toilet, he invented related products and helped increase the popularity of the flush toilet in the late 1800s. (The first toilet flush mechanism was invented in 1775 by Alexander Cummings, a Scottish watchmaker.)

The British word for toilet, “loo”, derives from the French “garde a l’eau!” In medieval Europe people had little conception of hygiene and threw the contents of their chamber pots out the window into the street below. In France the practice was preceded by “garde a l’eau!” (“watch out for the water!”). In England, this phrase was Anglicized, first to “gardy-loo!”, then just “loo”, and eventually came to mean the toilet/lavatory itself. The American word for toilet, “john”, is called after the John Harington mentioned above. 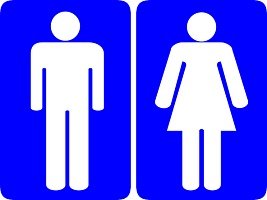 Toilet segregation between men and women – also referred to as Urinary segregation – was introduced at French public toilets in the 18th Century.  In 1887, Massachusetts became the first state to legislate female-specific restrooms.

In 1913, the Russian airline became the first to feature a toilet on board.

The movie Psycho is said to be the first film to show a toilet being flushed.

Toilet paper is thought to have been introduced in China at around 850, long before the advent of the toilet as we know it.