Who invented the light bulb?

Who invented the light bulb? No, it wasn’t Thomas Edison. Light bulbs were in use long before Edison applied for the patent in 1879. British inventor Humphry Davy invented an incandescent light bulb in 1801 and created the “arc lamp” in 1809.

In 1841, British inventor Frederick DeMoleyns patented a light bulb and in 1844 American John Wellington Starr filed a U. S. patent caveat for an incandescent lamp. Many others would follow suit but none of the bulbs were effective for everyday use.

In the late 1870s, Hiram Stevens Maxim – who later, in 1884, invented the first fully automatic machine gun – developed a light bulb and in 1880 installed the first electric lights in a New York City building (the Equitable Life Building at 120 Broadway).

British inventor Joseph Wilson Swan started experimenting with light bulb designs in 1850. On December, 18 1878, he demonstrated a light bulb at a lecture in Newcastle upon Tyne that soon had the attention of the world, including Edison.

Swan was awarded a light bulb patent (patent No. 4933) only in 1880, the year in which his house in Gateshead, England became the first house in the world lit by a light bulb.

Edison entered the race to develop an effective light bulb in 1878. He struggled with a solution at first but, with the assistance of Francis Upton, on October, 22 1879 he had a breakthrough. His light bulb burned continuously for 13 hours. Edison filed for a patent on November, 4 1879.

Edison continued with experiments and by the end of 1880 his light bulbs burned for up to 600 hours. Eventually they would glow for up to 1,200 hours. 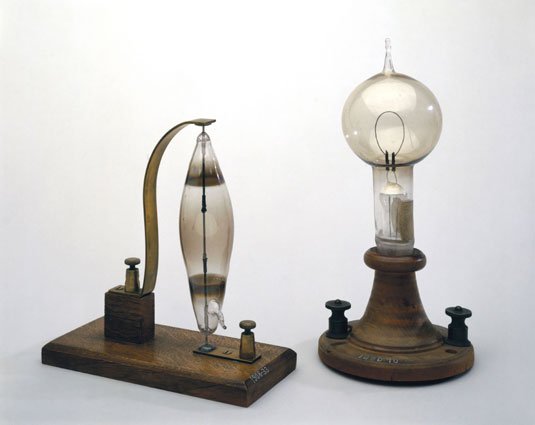 Edison went on to make big buck from the light bulb but Swan sued Edison for infringement and won. As part of the settlement, Edison was forced to take Swan in as a partner but later bought him out in the company that was to become General Electric.

In 1883, the US Patent Office ruled that Edison’s patent on the light bulb might have been based on that of William Sawyer and was invalid. It is not that Edison stole the idea: there are many examples of different people thinking up the same concept at more-or-less the same time. But there is no doubt that Edison borrowed some ideas for his light bulb design from Swan’s design.

Thomas Alva Edison (1847 – 1931) certainly was not a lazy guy. He filed 1,093 patents, including those for electric railways and the movie camera. When he died in 1931, he held 34 patents for the telephone, 141 for batteries, 150 for the telegraph and 389 patents for electric light and power. Unlike Leonardo da Vinci who never built the inventions he designed, Edison was not just a great theorist. He coined the phrase: “Genius is 1% inspiration and 99% perspiration.” He also said: “There are no rules here. We’re trying to get work done.”

So, who invented the light bulb?

It is generally recognized Thomas Edison perfected the electric light bulb but that Humphry Davy invented the light bulb.