There are many myths surrounding hearing that sometimes it’s hard to know what’s true and what’s not, particularly when it’s something you don’t want to believe. You don’t have to second guess, or rely on what others have to say; there are specialists and experts to consult who can provide answers and all the advice you should need. For a start though, here are some common myths….busted!

Hearing loss is just for the old 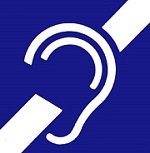 International symbol of deafness or hard of hearing

Did you know that more than 50% of people with hearing loss are under 65? Surprised?

There are many reasons why we suffer hearing problems and age is only one of them. If you are someone who thinks they’re too young to have hearing loss then you could be missing out on so much.

Asha (American Speech-Language Hearing Association) look at the effects of untreated hearing loss. If you are struggling, it really is a good to have a test. . . it may change your life.

I’ve only got one bad ear

Most people who think they have one bad ear, in fact have two bad ears! It’s just that one is a little bit better than the other and then they end up using that one more, thinking that it is OK. Usually hearing loss affects both ears pretty much equally and after a hearing test they are told they need a hearing aid in both ears.

A hearing aid will make me look weird

Hearing aids are nothing like the big ugly things they used to be; companies like Hidden Hearing offer models which are invisible to the naked eye and you only need to do a quick search on Google images to see how far they have come. They are lightweight, very discreet and some you wouldn’t even know they are there.

WebMD explains how far technology has advanced in new hearing aids. One thing is for sure, you’ll look much more strange ignoring someone because you couldn’t hear them, than wearing a hearing aid.

Hearing aids will restore my hearing to normal

Whilst wearing a hearing aid will help you hear in a lot of environments that were previously difficult, it does not “physically restore” hearing. It simply assists when worn but by how much depends on the severity of the problem in the first place.

If I shout at a deaf person they will hear me

No no no! This actually makes it harder, the vibrations distort the sound. Just speak clearly, allow the person to process what you’ve said before leaping into the next sentence – and don’t be patronising, they will tell you if they can’t understand you!