About 3,6 billion of the world’s 5.2 billion hectares of useful dryland for agriculture has suffered erosion and soil degradation. In more than 100 countries, more than 1 billion people are affected by desertification, forcing people to leave their farms for jobs in the cities. 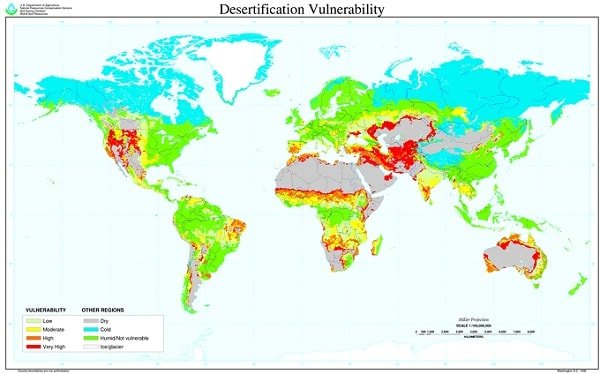 Desertification takes place in dryland areas where the earth is especially fragile, where rainfall is nil and the climate harsh. The result is the destruction of topsoil followed by loss of the land’s ability to sustain crops, livestock or human activity. The economic impact is horrendous, with a loss of more than $40 billion per year in agricultural goods and an increase in agricultural prices.

Desertification creates conditions that intensify wildfires and stirring winds, adding to the tremendous pressure to earth’s most precious resource, water, and, of course, the animals dependent on it. According to the World Wide Fund for Nature, the world lost about 30% of its natural wealth between 1970 and 1995.

Dust from deserts and drylands is blown into cities around the world. Dust from Africa reaches Europe through the Pasat wind, and even reaches US cities. Dust particles, which are less than 2,5 millionths of a metre in size, are inhaled, causing health problems and have been shown to boost death rates. 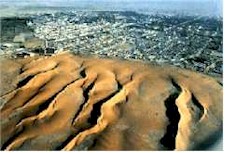 Deserts are encroaching cities. In the featured photograph, Sahara dunes tower over Nouakchott, capital of Mauritania, like a big hungry monster. Just 5,000 years ago the Sahara was covered with grasses and shrubs.

More than half the countries in the world – thus more than 100 countries, mainly in Africa, Asia and Latin America – are effected by desertification.

Desertification can be stopped, but unfortunately usually is brought to public attention when the process is well underway. The United Nations Convention to Combat Desertification was established to address the issue.