An earthquake is caused by a sudden slip on a fault. A fault is a fracture in the crust of the earth along which rocks on one side have moved relative to those on the other side. Stresses in the earth’s outer layer push the sides of the fault together, pressure builds up and the rocks slip suddenly, releasing energy in waves that travel through the rock to cause the shaking that we feel during an earthquake.

Earthquakes tend to be concentrated in narrow zones. There are 7 major crustal plates on earth, about 50 miles (80 km) thick, all in constant motion relative to one another, moving at the speed at which your fingernail grows, at between 10 and 130 mm (from less than one half to 5 inches) per year.

Number of earthquakes per year

It is estimated that there are several million earthquakes in the world each year. Many of these earthquakes go undetected because they occur in remote areas, mostly under the sea, or have very small magnitudes. 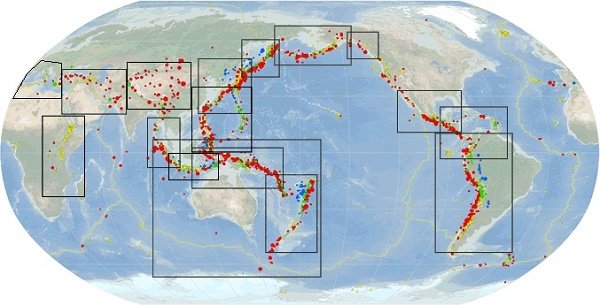 A significant earthquake is one of magnitude 6.5 or higher or one of lesser magnitude that causes casualties or considerable damage. Major earthquakes have a magnitude larger than 7.0.

Large earthquakes that originate from the sea bed result in tsunamis, causing huge waves to travel 500 mph (800 km/h) or more toward coasts. In 2004, the largest ever such tsunami killed more than 227,000 people in 14 countries along the Indian Ocean. It was estimated to have released more energy than 20,000 atomic bombs.

On January 12, 2010 an earthquake of magnitude 7.0 occurred 10 miles off the coast from Port-Au-Prince, Haiti, killing more than 200,000 people. The earthquake did not, however, came as a surprise to seismologists who predicted the fault slip just a week earlier. Governments and people often ignore the predictions of earthquakes.

The largest earthquake ever recorded occurred in Chile in 1960: it had a magnitude of 9.5. See the list of largest and deadliest earthquakes.

There are 2 basic types of earthquakes:

Did you know? There are more earthquakes in Alaska than in California.