Those daring men in their magnificent flying machines! The brave Canadian bush pilots, the South American jungle pilots and the freight pilots operating in crisis zones in Africa. They land and take off in extreme conditions in the world’s most remote and hostile areas.

There are a fair number of STOL capable aircraft. After all, you need STOL aircraft to land on an aircraft carrier. Huge aircraft such as the Boeing C-17 Globemaster have STOL capabilities. Some waterbombers are also required to be STOL capable.

The granddaddy of STOL is the Fieseler Fi 156 Storch, a German reconnaissance aircraft introduced in 1936. The “modern” and equally legendary equivalent is the light utility Piper PA-18 Super Cub, launched in 1949. More than 15,000 Super Cubs were built in various models format, including floatplanes, until production ended in 1994.

The standard Piper PA-18 Super Cub requires 400 ft (120m) distance for safe landing and 200 ft (60m) for takeoff. (Landing/takeoff over a 50 ft obstacle is 800 ft (244m) and 500 ft (162m).) To achieve extreme short takeoff and landing distances, they are equipped with STOL kits that basically include changes to the wing design, strengthened carriage chassis and some engine changes. 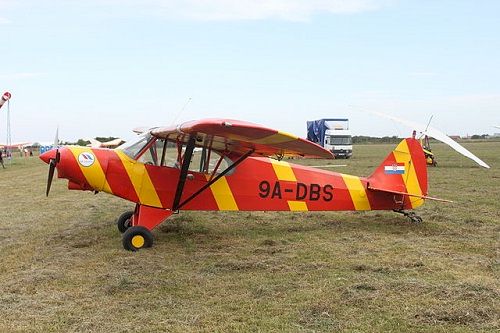 The aircraft favored for STOL record attempts, the venerable Piper PA-18 Super Cub.
This is a standard model – XSTOL versions have modified wings and carriages.

But there’s STOL and then there’s XSTOL – Extreme Short Takeoff and Landing. The latter are those amazing machines that can takeoff and land in a very, very short distance.

Watch Bobby Breeden doing a STOL in a Super Cub –

If you’ve been thinking, “Are these guys competing for the shortest STOL ever?” you are right. Every year, bush pilots test their skills in the annual Valdez STOL competition, called the Valdez May Day Fly-In.

A STOL aircraft is called a “Sky Jeep” because of its (almost) go-anywhere capabilities. These include the mentioned large-body aircraft and, notably, the P-750 XSTOL which requires only 800 ft (244m) for takeoff and landing – quite remarkable for a 10-seater.

* The STOL CH range of kit aircrafts made by Zenith Aircraft Company from Mexico, Missouri.

* The Pipstrel Sinus ultralight motorglider, the first light aircraft to fly around the world (2004).

In fact, there are a number of contenders – see Wikipedia’s List of STOL aircraft.

There are a few things you’ll notice from all these little miracle machines:

1) they all have top fixed wings,

2) they’re powered by either Rotax or Lycoming engines;

Airport runways are between 6,000 and 10,00o feet (1,8/3km) but the landing strip on an aircraft carrier is less than 500 feet (152m). That would be no problem at all for Dutch pilot Jaap Rademaker – he required less than 20 ft to land his Ukranian Aeroprakt A-22 Valor (aka Foxbat) lightsport aircraft on the deck of a freight ship, the Global Seatrade Hartman M2 Runner.

The Aeroprakt A-22 Valor (Foxbat) is classified as a microlight by the World Air Sports Federation (The FIA, Fédération Aéronautique Internationale).

The Hawker Harrier, Boeing X-32, F35-lightning and tilt-wing or tilt-rotor aircraft and helicopters are indeed STOL aircraft but are classified as VSTOL – Vertical Takeoff and Landing.