The largest island in the world is Greenland. Australia is considered a continent because it has unique plant and animal life. Antarctica also is a continent – larger than Europe and Australia. Greenland, although quite big, shares the habitat features of Northern America.

The smallest island in the world – according to the Guinness Book of Records – is Bishop Rock. It lies at the most south-westerly part of the United Kingdom. It is one of 1040 islands around Britain and only has a lighthouse on it.

In 1861, the British government set out the parameters for classifying an island. It was decided that if it was inhabited, the size was immaterial. However, if it was uninhabited, it had to be “the summer’s pasturage of at least one sheep” – which is about two acres. A lot of standing room – not much else.
This is Bishop Rock, the world’s smallest island.

“In the 13th Century, people convicted of a serious crime were taken out to Bishop Rock and left there with bread and water to be ravaged by the sea. Or so history suggests. Today the rock is better known as the point where record-breaking attempts to cross the Atlantic are started and finished.” – Diver Magazine

Country with most islands

Going by the above parameters, most of the 179 584 “islands” around Finland and the almost 200 000 around Canada would not match Indonesia as the country with the most islands. In fact, Indonesia consists only of islands – 13 667 of them, 6000 of which are inhabited.

The remotest uninhabited island is Bouvet Island in the South Atlantic.

The remotest inhabited island in the world is Tristan da Cunha. It is in the South Atlantic, 2575 km (1600 miles) south of St Helena, which is an island a few hundred kilometres (miles) off the coast of South Africa. Tristan da Cunha has no TV but it has one radio station. The population totals 242 and they only have 7 surnames (last names) between them, so they are all related. Tristan da Cunha does have a capital, called Edinburgh of the South Seas.

The smallest independent island country is the Pacific island of Nauru. It measures 21,28 sq km (8.2 sq mi). (Only the Vatican City and Monaco are smaller countries.)

Living on an island

One out of ten people lives on an island (thus some 700 million people). Which is not so hard to imagine when you consider that more than 240 million people live in Indonesia alone – and some 64 million live in Britain, the only island connected to a continent through the chunnel (tunnel under the sea). 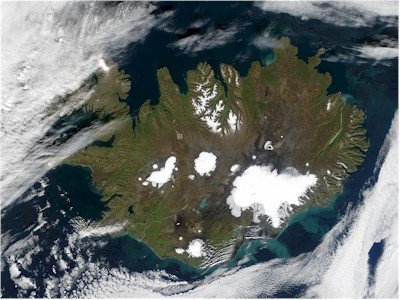 Iceland, ironically, is quite green – as this graphic depicts.

Over one third of Iceland is volcanically active and loaded with lava fields. Iceland is far enough north to be entirely covered by ice, like Greenland to the west of it, but the magma below the surface heats the rock above, keeping it “green.” 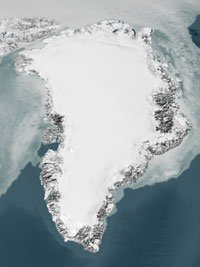 Greenland is the largest island in the world and other than its name suggests, is covered in ice – although some of it is melting.