The word “biology” was coined by Jean-Baptiste Lamarck and Gottfried Treviranus in 1805. Lamarck is known for being the first person to suggest that humans might have arisen from apes, which he mentioned in 1809.

Charles Darwin (1809-1882), the most famous evolutionist, had a different view. Instead of suggesting that humans developed from apes he supported the view of Thomas Henry Huxley that humans and apes have a common ancestry, each arising into an own line of evolution.

In 1831, when he boarded HMS Beagle for the south Atlantic, Darwin was a trainee pastor and a firm believer in the biblical account of the Creation. He sailed with the Beagle for five years as geologist and after visits to the Galapagos Islands  west of Ecuador he developed his theory of natural selection in 1838, sharing his observation with only close friends while continuing his research.

In the mid-1840s Alfred Russel Wallace had readings of two crucial works: Charles Lyell’s Principles of Geology and Robert Chambers’s Vestiges of the Natural History of Creation, early popular examinations of biological evolution. In 1848, Wallace and his friend Henry Walter Bates traveled to the Amazon where Bates would carry out his research on natural selection over the next 11 years.

Wallace continued his research in Indonesia in 1856, corresponding with Darwin that year and the next. In 1858, Wallace published the essay On the Law Which Has Regulated the Introduction of New Species which Lyell showed to Darwin, prompting the latter to rush forward completion of his On the Origin of Species, published the next year. From that day on we had “Darwinism,” not “Wallacism.” 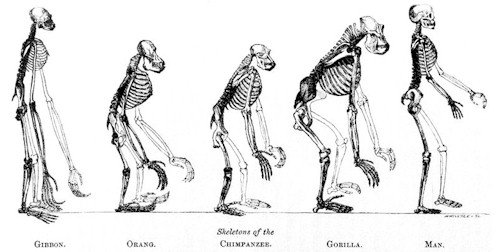 The theory of “the missing link” was proposed by Huxley in 1863. While the link is still missing, the theory of evolution has become challenged by ID, or “intelligent design,” the notion that the universe is so complex that it had to be designed by a higher power.