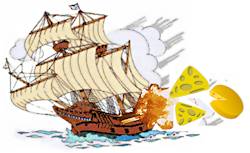 The phrase “big cheese” originates from the Persian and Hindi word “chiz” which means “thing.” In 1886, Sir Henry Yule wrote that “it was common among Anglo-Indians” to say something is “the real big chiz.” The “big chiz” became “big cheese.” The phrase is most commonly used to refer to someone of importance or, in the least, someone who thinks he/she is the big cheese.

Talking about cheese, when a Uruguayan ship ran out of canon balls during an 1865 battle against Brazil they fired the next best thing: stale Dutch cheeses. It dismasted an enemy ship.