The oldest living thing on earth 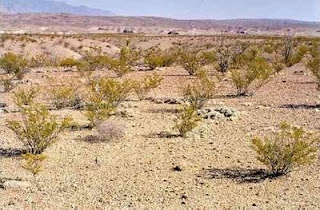 Until the late 1970’s, the oldest living things were thought to be the 5000-year old bristlecone pines found in the White Mountains of California and the Snake Range of eastern Nevada.

Then Dr. Frank Vasek of the University of California discovered flowering shrubs called creosote bushes (Larrea tridentata) in the Mojave Desert. One of the oldest shrubs is 50 feet (15 metres) in diameter. It is estimated that it started from a seed nearly 12,000 years ago.

During its lifetime the last major period of glaciation in North America came to an end, the wheel and writing were invented, and the great Egyptian and Mayan pyramids were built. The shrub is still living.