Bats are the world’s only true flying mammals – with a healthy appetite: a bat can eat up to 1000 mosquitoes or other insects in one hour. About 70% of bat species are insectivores. Most of the rest are frugivores – they eat fruit.

Although fruit bats mostly eat, obviously, fruit, they never suffer tooth decay from the sugar in the fruit. This led scientists to investigate the enzymes in their saliva for a possible cure for plaque disease in humans. 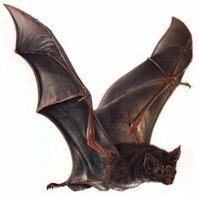 Three bat species prefer blood. They are vampire bats. They only live in Central and South America and Mexico. And while these bats do carry rabies and can infect animals and even people their saliva also contains an enzyme that stops blood clotting and could save the life of stroke victims.

A female bat gives birth to only one offspring per year. So, perhaps you should consider getting a bat house (or bat box) to help protect the species and you might just have the favor returned in future.