Dogs have been companions to humans for tens of thousands of years. In a new book, Dr Philip Howell argues that it was the Victorians who ‘invented’ the modern dog with a place at the heart of the family. But, as some dogs became pets, others became pests.

The British are a nation of dog lovers: almost a quarter of households have at least one. Perhaps we love them too much. One wit famously described the English upper classes as people who sleep with their dogs and put their children into kennels.

Hopelessly in love with dogs

But when did the nation fall so hopelessly in love with dogs? And what were the limits to this affection? Cambridge academic Dr Philip Howell argues that it was the Victorians who sealed the fate of the dog as a household pet and gave it a much-cherished, but also contentious, role at the heart of the family.

In At Home and Astray: The Domestic Dog in Victorian London (published on 30 April 2015 by University of Virginia Press), Howell suggests that the family dog as we know it today was ‘invented’ in the London of the 19th century. 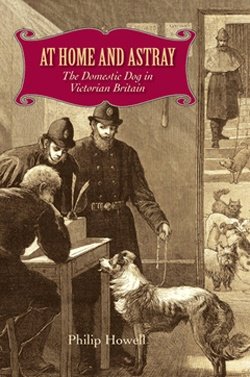 At Home and Astray by Philip Howell.

In a series of themed chapters, Howell’s fascinating analysis throws light on a period that saw rapid change in human-animal relationships within the urban context – a shift that saw the development of the pet industry as well as the beginnings of ‘animal rights’.

As a cultural geographer, Howell is particularly interested in space, and the ways in which people and animals share space. The key boundary line lay between the private and public zones of the city. The dog became properly private – as a pet – but only at the expense of being expelled from the public realm – as astray. The dog was portrayed as an animal that naturally loved the family, and suffered as a ‘homeless’ vagrant on the streets.

The second half of the 19th century was an era when London’s population boomed. The newly affluent middle classes became increasingly focused on the creation of the home as an oasis of domestic bliss. At the same time, Londoners became increasingly ‘unmoored’ from the natural world as many animals (with the notable exception of horses) disappeared from view.

As London grew, sanitation regulations were imposed. The herds of dairy cows needed to supply the capital with milk migrated away from the centre of the city. Abattoirs and livestock markets were shifted to outlying districts. From the mid-19th century, sheep and cattle, pigs and geese were no longer driven through the streets of central London. Even dog carts were banned.

Howell argues that, as other animals disappeared from the streets, the pet dog filled a vacuum. Dogs (or at least certain ‘polite’ dogs) were invited in from the cold of the backyard, or kennel, to join the family at the fireside. In the intimate space of the domestic world, the dog was precious rather than productive, even child-like in its reliance on the humans that surrounded it. ‘A prisoner of want and hunger and neglect’ John Charles Dollman, “Supported by Voluntary Contributions,” Illustrated London News, 15 December 1875, 20 (Reproduced by permission of the British Library).

In the bosom of the family, the dog gained a name, a personal narrative and, at the end of its life, a burial place. As pets, dogs were mourned by their owners, who interred them in pet cemeteries where their final resting places were marked by gravestones. The reverse was true too: in best known sagas, dogs mourned their owners.  Banished from his master’s grave, a Skye terrier called Greyfriars Bobby kept faithful vigil in Greyfriars Churchyard in Edinburgh for 14 years.

Bolstered by its reputation for unswerving loyalty, the domestic dog was not just petted but clearly anthropomorphised. Cuddled, coiffed and beribboned, it was also feminised. This highly prized pet dog was an easy target for thieves. By 1837, an estimated 141 dog stealers were operating in London. In a sequence of events, later immortalised by Virginia Woolf in her novel Flush, the poet Elizabeth Barrett’s cocker spaniel was stolen by a notorious ‘dognapper’. He was returned for a ransom of six guineas. 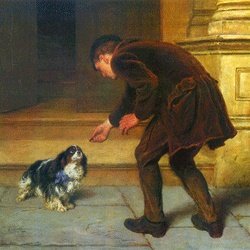 The rise in popularity of the dog and a concern for the fate of animals in the streets was also accompanied by the emergence of the first homes for street dogs. A ‘Temporary Home for Lost and Starving dogs’ opened in Holloway in 1860: moving south, it became the famous Battersea Dogs Home.

The Times scoffed at the sentimentality evident in the provision of a facility for homeless dogs. The newspaper commented that it “expected that human benevolence would have its limits, and that those limits would be marked somewhere within the regions of humanity, as far as mere sentimental interference was concerned”. Why should there not be a home for rats, it wondered with tortured logic.

The problem of strays was certainly acute: in 1869 it was reported of London that “during the five months of the police raid against wandering curs, 12,465 dogs were taken into the ‘Home’ where a gentle quietus was administered to the halt, blind, maimed and diseased; and the rest were either restored to their owners or placed with new ones”.

The description ‘home’, suggests Howell, is also highly significant: ‘a good home’ was what a dog needed in order to find salvation from wickedness – and it was analogous to the homes set up to offer shelter and a better life to fallen women. Battersea Dogs Home provided a route to salvation for some lucky dogs – but also put down the strays that could not be ‘rehomed’.

In the end, the British, like most nationalities, have a curious relationship with dogs. Pets are pampered and their pedigrees celebrated. Dogs on the streets are animals to fear and avoid – feral, diseased and dangerous. As Howell points out, we may be a nation of dog lovers, but it is a conditional kind of love.

By the University of Cambridge Research. The article is licensed under a Creative Commons Attribution 4.0 International License.