Although a cow has no upper front teeth, it grazes up to 8 hours a day, taking in about 45 kg (100 lb) of feed and the equivalent of a bath tub full of water. A healthy cow gives about 200,000 glasses of milk in her lifetime.

A cow has four stomachs: the rumen, reticulum, omasum and abomasum. The rumen is the largest stomach and acts as a fermentation chamber. The abomasum is last of the four and is comparable in both structure and function to the human stomach. 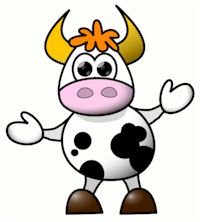 With all its grazing and many stomachs, it is no wonder that cows are one of the main contributors to the hole in the ozone layer. Apart from CFC, the biggest culprit is hydrocarbon emissions from cars and cows. Yes, cows! Cows release some 100 million tons of hydrocarbon annually – by releasing gas.

To give you an idea of how much gas a cow emits: if the gas of 10 cows could be captured, it would provide heating for a small house for a year.

But unlike what you think, cows release hydrocarbon mostly by burping.

The average height of a cow is around 55 inches but Dexters are 36 to 42 inches. The smallest cow in the world is Swallow, a Dexter cow from New Yorkshire, England. She stands only 33 inches (84 cm) from hind to foot. Swallow (b. 1999) is a normal healthy cow that already had nine healthy (normal size) calves.

There are more than a billion cattle in the world, about 200 million in India.

Cows that are called individually by name and cows that are played classic music to provide more milk.

Twelve cows are known as a “flink.”