In fact these magnificent white stallions were named after a tiny Slovenian village and stud farm called Lipica only a stone’s throw from the Adriatic coast.

In the 16th century, the Austrian Archduke Karl was looking for a suitable site to establish a stud farm for the needs of the Austrian court and chose Lipica as the ideal spot. It was relatively close to the sea, only 15 km away, yet the climate of the Karst plateau at an altitude of 400 m is excellent. On 19 May 1580, he purchased the entire area so that the local population had to move to nearby villages.

The same year the Baron Khevenhüller brought a large number of horses from Spain, and in 1581 another 6 studs and 24 mares were brought to Lipica. A year later, and again in 1584, another herd of horses was brought here from Spain and northern Italy (Polesina), and the entire breeding stock was mixed with the local mares.

The stud farm was did not start operating before 1585 because the stables, the living quarters and a man-made water supply system, to provide drinking water, had to be built. The first administrator of the stud farm was Franc Jurko. The royal court was regularly supplied by a large number of studs and mares from Lipica.

In 1701, the Spanish stud Cordova, with an excellent pedigree, was brought to Lipica. The number of mares increased to 150. In 1768, twenty Kladrub mares from the court stud farm of Kopcan were brought to Lipica, but were returned in 1771 to the reopened court stud farm at Kladrub in Bohemia. In this period, Spanish and Italian horses were mostly used for reproduction, and, to a lesser extent, also the horses from Denmark, northern Germany and Arabia.

This was the time of the Napoleonic Wars and the horses were sent to Székésfehervár in Hungary. The horses began to return the same year, but most of them were moved to Prestranek.

On 15 November 1805, the horses were on the move again. This time they were taken to Ðakovo in Slavonia, but returned in 1807.

When Napoleon occupied the region again in May 1809, the herd was again taken abroad. For six years, the horses remained at Pecsek, on the river Maros, in Hungary.

The herd returned to Lipica in 1815 in very poor condition. Then all the horses were inspected and all animals that did not display Lipizzaner features were eliminated.

In 1816, the Arabian stud called Siglavy was purchased, and became the co-founder of the new Arabian lineage in the raising of the Lipizzaner horse. The pedigree has been preserved to this day and has become the sixth ancestral line of the Lipizzaner.

When World War I broke out, most of the stud farm stock was moved to Laxenburg near Vienna in 1915. After the fall of the Austro-Hungarian monarchy, the stud farm was taken over by Austria; the number of horses was reduced and the herd was moved to the state stud farm at Piber near Koflach, in the Austrian province of Styria. The horses that remained at Kladrup, provided stock for the newly-founded Czechoslovakian stud farm of the Lipizzaner horse.

A portion of the Austrian Lipizzaners, a herd of 109 horses, was taken over by Italy and moved back to Lipica in 1919. The Italians continued raising horses and bred a new type of Lipizzaner horse that differed from the classical pedigree.

During World War II, the Germans occupied Lipica on 9 September 1943. On 16 October of the same year, the Germans moved 176 horses to Hostinec in Sudetenland.

In December 1945, the American military authorities handed over a part of the herd (109 horses) to Italy, and the rest were taken to Piber, Austria. At that time, Yugoslavia demanded the return of the Lipizzaners, but only 11 horses were handed back. Later, several scores of horses were sent to Lipica from the former court stud farm at Demir kapija, so that in 1949 Lipica was regenerated, and by 1979, all of the six lines of the Lipizzaner horse were restored through purchases and exchanges of breeding mares and studs. 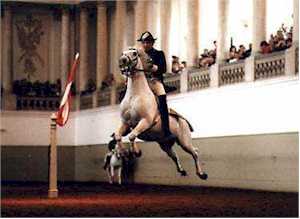 Source: R. Vojtkovszky: History and Development of the Autochthonous Lipizzaner in the Slovenian Karst, Sejana 1995. Story by Marjan Golobic.