“Promptly prepare a provision of taffeta and ropes, and you will see one of the most incredible things in the world”

So Joseph Montgolfier wrote to his brother Jacques in 1782. After months of experimenting with cloth, paper and smoke at their paper mill in Annonay, France, the Montgolfier brothers began conducting tethered flights of their hot air balloons. They sent up a sheep, a duck and a rooster on a flight that carried the animals about 3 kilometres (2 miles) in eight minutes, more than a hundred years before the advent of fixed-wing aircraft.

On 21 November 1783 Pilatre de Rozier and the Marquis d’Arlandes were the first humans to take to the skies, in a Montgolfier balloon. The straw fire they used to warm the envelope caught the balloon on fire but they doused the flames with water they carried on board for just such an emergency. The flight lasted 20 minutes and covered 8 km (5 miles) at an altitude of 100 metres (330 feet). It was the start of another challenge for man to race each other higher, further, faster. And the quest to become the first to circumnavigate earth in a hot air balloon.

The first manned balloon flight in North America was by J.P.F. Blanchard on 9 January 1793. Several decades later, on 1 July 1859, John Wise made the first balloon airmail flight from St Louis to New York. During the Civil War both the Confederate and Union armies made use of balloons as observation posts. Between 1870-1, during the Franco-Prussian War, 66 balloons carried more than 160 people out of Paris and provided the only contact with the outside world.

The race is on!

Maxie Anderson and Don Ida made the first attempt to circle the globe by balloon on 11 January 1981. Starting from Luxor, Egypt to avoid the off-limits air space of the Soviet Union, they managed 4 316 kilometres (2,676 miles), landing in India.

In March 1988 John Petrehn set out from Argentina to circle the globe, but winds destroyed his hybrid tandem three-balloon system.

A later attempt to circle the earth in a balloon was made by the Earthwinds Hilton team, headed by Larry Newman, beginning in November 1991 and concluding in December 1994 unsuccessfully. Earthwinds Hilton employed an ingenious system designed to use compressed air in an anchor balloon suspended below the gondola to eliminate the need for ballast.

Bad weather prevented lift-off of the Virgin Challenger through the 1995-96 launch season in Morocco. The following year, pilots Per Lindstrand and Richard Branson were able to launch the balloon from Marakech, only to be forced down by technical problem the next day in Algeria. A subsequent attempt the next year was cut short when a taxiing jetliner blew the inflated balloon envelope free from its ground moorings. The balloon was recovered in Algeria.

The Virgin Challenger piloted by Per Lindstrand and Richard Branson. They launched the balloon from Marakech in 1997, only to be forced down by technical problems the next day in Algeria.

The Breitling Orbiter – piloted by Betrand Piccard, Wim Verstraeten and Andy Elson – launched from Switzerland in January 1997. The balloon landed a few hours later when the crew was overcome by kerosene fumes from a leaking valve. In January 1998 the same team set a world record for duration by staying aloft nonstop and unrefueled for 10 days on a flight from Switzerland to Burma. Their flight was cut short when China refused permission to fly over the country.

The Breitling Orbiter – piloted by Betrand Piccard, Wim Verstraeten and Andy Elson – launched in January 1997,  landed a few hours later when the crew was overcome by kerosene fumes from a leaking valve.

The balloon was rebuilt and renamed Solo Spirit. A year later Fossett launched from St Louis and flew for more than six days before landing in India. Flying halfway around the earth, he set new world ballooning records for distance and duration. His duration record was eclipsed the following year by the Swiss Breitling Orbiter team, but his distance record stood.

On 31 December 1997 Fossett made a third attempt with a larger Roziere envelope but had to land in south eastern Europe due to bad weather and technical problems.

The same night that Fossett had embarked on his third attempt, another solo adventurer, Kevin Uliassi, launched from Illinois. He landed three hours later following the rupture of the helium cell in his Roziere envelope.

In January 1998 the Global Hilton team launched its Roziere balloon from Albuquerque, New Mexico. Despite a flawless launch, crew members Dick Rutan and Dave Melton aborted the flight a couple of hours later when their helium cell burst. The two men parachuted to safety. The balloon was destroyed by fire when it landed in Texas later in the day.

Steve Fossett again launched from Mendoza, Argentina on 7 August 1998 in Solo Spirit. He set a new record covering 15 200 miles, only to be forced down in bad weather off the coast of Australia. Upon landing in the ocean, the capsule turned upside down and began filling with water. The outside of the capsule was aflame, and Fossett was nearly overwhelmed by suffocating fumes from the resins lining the exterior of the capsule. Grabbing his 12-pound life raft and EPIRB beacon, which he had triggered during the descent, he climbed from the capsule as the storm continued to rage around him. Incredibly, he was injured and brought to safety by the Australian coast guard.

At 8.05 GMT on Monday 1 March 1999 Swiss Betrand Piccard, on his third attempt, teaming with Briton Brian Jones, launched the Breitling Orbiter 3 from Chteau d’Oex in the Swiss Alps. They climbed to an altitude of 7’000 meters (21’000 feet) in a little more than one hour, reporting a stunning view of the Matterhorn as they cruised out of Switzerland into Italy. 19 days, 1 hour and 49 minutes later, at 09h54 (GMT) hours on Saturday 20 March 1999 they passed the finishing line of 9.27 over Mauritania, North Africa, becoming the first balloonists to circumnavigate the globe with a non-stop, non-refueled flight, having traveled 42 810 kilometres.

They did it! Breitling Orbiter 3 is the first hot air balloon to circumnavigate the globe. 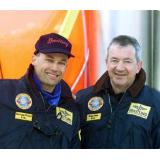 Betrand Piccard and Brian Jones – first around the world in a hot air balloon, 20 March 1999.

Not to be outdone, Steve Fossett again braved the skies in a solo flight. On Tuesday 2 July 2002 Fossett became the first to achieve solo circumnavigation of the world in a hot air balloon.

On 4 May 1961 the absolute world balloon altitude record was set when Commander M.D. Ross and Lieutenant Commander V.A. Prather piloted a Winzen polyethylene balloon to 34 466 metres (113,739 feet) above the Gulf of Mexico. Tragically, Prather drowned at landing when his pressure suit filled with water.

The first successful human flight into the stratosphere was made on 27 May 1931 when Auguste Piccard and Paul Kipfer rose in the first pressurised gondola to 15 781 metres (52,077 feet). To keep the craft warm, they painted the top of the gondola black and the bottom white. But the cabin overheated to 41 degrees Celsius (106 Fahrenheit). A year later, after they had painted the gondola all white, the cabin temperature dropped to a frosty -18 degrees Celsius (0 degrees Fahrenheit) at 16 200 metres (53,460 feet).

One of the world’s greatest

On 16 August 1960 Air Force Captain Joe Kittinger stepped from an open balloon gondola at 31 151 metres (102,800 feet) above Tularose, New Mexico and set a world record that stood for many decades. It was the highest altitude parachute jump ever made from any aircraft. In affect, Joe Kittinger became the first man in space. He is considered one of the greatest heroes ever.

Who will be the first to swim around the world?