Home » sports » Who will be the first to swim around the world?

Who will be the first to swim around the world?

Far-fetched it may seem but when Benoit Lecomte swam across the Atlantic in 1998 he introduced a new global sports challenge: the first to swim around the world.

The long history of swimming is depicted in mosaics from early Middle Eastern civilizations and at Pompeii.

Although swimming was not included in the ancient Olympic Games, the Greeks practiced the sport, holding it in high regard. Plato considered a man who didn’t know how to swim to be uneducated.

Julius Caesar and Charlemagne were known as great swimmers and Louis XI frequently swam in the Seine.

There have been other swimmers whose talents brought them international fame: Johnny Weissmuller, Gertrude Ederle, Mark Spitz. And then there was Captain Matthew Webb. On 24 August 1875 he slipped into the water at Dover, England, and 21 hours and 45 minutes later touched land at Cape Gris Nez, France, becoming the first man to conquer the English Channel.

Swimming the English Channel became the greatest swimming challenge of the day. Since Webb’s triumph, there have been more than 6 200 known attempts to swim the English Channel. More than 470 people were successful over 600 times, including a 12-year-old boy in 1979, a 12-year-old girl in 1983, a 65-year-old man in 1983, and a 45-year-old woman in 1975. Mike Read holds the men’s record, and Alison Streeter surpassed him with the women’s record.

Matthew Webb, in search of an ever greater challenge, died attempting to swim the violent whirlpool rapids below Niagara Falls in 1882.

The first woman to swim the English Channel was 19-year old American Gertrude Ederle, who was partially deaf from a childhood case of measles. From 1921 to 1925, Ederle set 29 US and world records for swimming races ranging from the 50 metre (50 yard) to the half-mile race. In the 1924 Summer Olympic Games, she won a gold medal as a member of the championship US 400-meter freestyle relay team, at only 17 years of age. On 6 August 1926 she crossed the English Channel in 14 hours and 31 minutes – 2 hours faster than the men’s record – setting a woman’s world record that stood for 35 years. It brought her even further international acclaim, and a ticker parade in New York.

Gertrude Ederle 1926 – first woman to swim across the English Channel.

Swimming the open ocean, any ocean, is no easy feat. The water is icy cold, the tides are fierce, and the traffic of tankers and ferries is daunting. Such huge challenges, however, seem to be the thriving factor for the most brave. One of whom is Alison Streeter (b. 1964). Known as “Queen of the Channel,” she has swum the chilly Channel more times than anyone else – 43 crossings. Streeter first swam the Channel at 18, is the first woman to swim the ‘double’, and the only woman ever to have completed the ‘three-way’ to France, back and to France again.

Alison Streeter has swam the grueling English Channel more times than anyone.

Although the 34km (21 mile) English Channel is considered the most grueling swim in the world, other waterways were tackled in the quest to become the one who swims further and faster: Siberia’s Lake Baikal, Cuba to the Florida Keys, the Canada Channel, Catalina Channels, Manhattan Island, and even the Bering Strait.

Another great sportsman – at 13 years old Kutraleeswaraan swam six waterways in one calendar year, earning him a place in the Guinness Book of World Records.

The greatest swimmer ever?

Possibly the greatest triumph of endurance is Benoit Lecomte swimming across the Atlantic ocean.

Lecomte, born 1967, immigrated from France to Austin, Texas, at age 23. When his father died of colon cancer in 1992, it spurred him to do something extraordinary to raise awareness of and money for cancer research. With the help of Edward Coyle, director of UT Austin’s Human Performance Lab, and dieticians, Lecomte trained to build his endurance, swimming and cycling 3 to 5 hours a day, six days a week for two years.

On 16 July 1998, he set out from Cape Cod with 8 wet suits, a snorkel and some flippers into turning weather. Navigated through the 40th and 50th latitude by two French sailors on a 12m (40 foot) sailboat and protected by an electronic force field, Lecomte swam 6 to 8 hours a day at two-hour intervals. 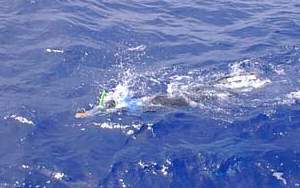 He mainly used the crawl stroke, switching occasionally to a mono fin and using an undulating dolphin kick to carry him over the 5 600 km (3 736 nautical miles) of relentless waves. After 72 days later, on 28 September 1998, he swam ashore, exhausted but heroic, at Quiberon, France.

In a remarkable feat of endurance, 31-year Benoit Lecomte became the first man to swim across the Atlantic ocean, 1998.

Part of the reason for the Pacific crossing is to raise awareness about the impact of excessive human garbage polluting the world’s oceans. In his words:

Before anything else I am a father and as a father the future of my children concerns me because, as we all know, our way of life is not sustainable. I don’t want to be passive and pass on to my children the liability we are tagging on to our environment. We can all make a difference once we realize how we can be better stewards of the environment and our own ecological footprint, make appropriate daily changes and inspire others to do the same. 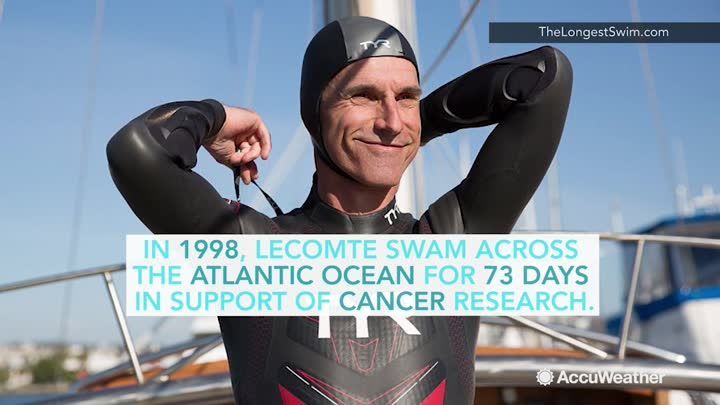 Lecomte probably could not have done it without the modern techniques and clothing that have helped athletes reach astonishing levels of performance. The latest swimming costumes reduce drag resistance by more than 8%, resulting in a performance that is even better than when swimming naked.

Consider that when Captain Matthew Webb became the first person to swim the English Channel in 1875, his waterlogged woolen swimwear weighed about 3 kg (10 lb). By contrast, the new Speedo one-piece weighs just a few ounces, even when soaked.

But it is not just the clothes that maketh the man, or woman. To swim across an ocean, you have to become your own hero before becoming everybody else’s. That is the type of material that Lecomte donned – and what his challengers will need.

The 1920s was the Golden Age of Sports and Johnny Weissmuller was its golden swimmer. He set world records in 67 different events before trading swimming for even greater fame as Hollywood’s most durable Tarzan.

The first in a hot air balloon around the world

The first airplane to fly around the world