Home » vehicles » First to fly around the world

First to fly around the world

In 1924, four Douglas World Cruisers and eight American crewmen set out from Seattle, Washington, to attempt the first around-the-world airplane flight. One hundred seventy-five days later three of the aircraft and crews became the first to circumnavigate earth.

The Douglas World Cruiser biplane was a variant of the Navy’s DT-2 torpedo bomber that could be operated either with wheels or floats. The prototype was delivered 45 days after the contract was let in summer 1923. Tests were successful, and four more aircraft were ordered.

The success was largely a result of extensive planning; 30 spare engines were dispatched all over the world prior to the flight; with co-operation of the Royal Air Force and the US Navy, 28 nations supplied thousands of gallons of fuel and oil along the flight path.

The airplanes left Seattle, Washington, on 6 April 1924 and headed west, equipped with the latest navigational aids. Even so, fog, blizzards, thunderstorms and sand storms took a toll. On April 30, Seattle crashed in dense fog on a mountainside near Port Moller on the Alaska Peninsula. Major Martin and Sergeant Harvey hiked out of the wilderness. The remaining crews continued, flying on to Japan, Southeast Asia, India, the Middle East, Europe, England, and Ireland. On 3 August Boston was forced down in the North Atlantic, sinking in rough seas while being towed. A prototype was dispatched to Nova Scotia, where Lieutenant Wade and Sergeant Ogden renamed the aircraft Boston II and rejoined the flight. 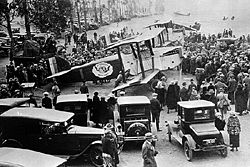 Douglas World Cruisers – first to circumnavigate the globe, in 1924

The Douglas World Cruiser Chicago is now on display at the National Air and Space Museum in Washington, D. C., while New Orleans is on display at the Museum of Flying in Santa Monica, California. The Seattle wreckage was retrieved in 1967 through the efforts of Bob Reeve to go on display in the Centennial Aviation Museum, which caught fire in 1973. It survived the fire and is now displayed at the Alaska Aviation Heritage Museum.

Nine years later, in 1933, it took another American, Wiley Post, only 7 days to be the first to fly solo around the world. Between July 15 and 22, Post covered 25 110 km (15,596 miles) in 7 days, 18 hours and 49 minutes in one of the most remarkable displays of flying endurance of the century. Post’s single engine Lockheed Vega, the Winnie Mae was equipped with a Sperry automatic pilot, a radio direction finder, and other new devices.

Wiley Post (1898 – 1935) First to fly solo around the world, 1933. Post was considered one of the most colorful figures of early aviation. He set many records before being tragically killed near Point Barrow, Alaska in 1935 in a crash which also took the life of his flying companion, humorist Will Rogers.

Earlier, in 1931, ex-barnstormer Post and navigator Harold Gatty had thrilled the nation by dashing around the world in the Winnie Mae. The flight was not only a great technical achievement, but one which demanded extraordinary fortitude. For over 106 hours, neither Post nor Gatty had an opportunity to sleep. The flight’s elapsed time of 8 days, 15 hours and 51 minutes far surpassed the previous record of 21 days set in 1929 by the airship Graf Zeppelin. 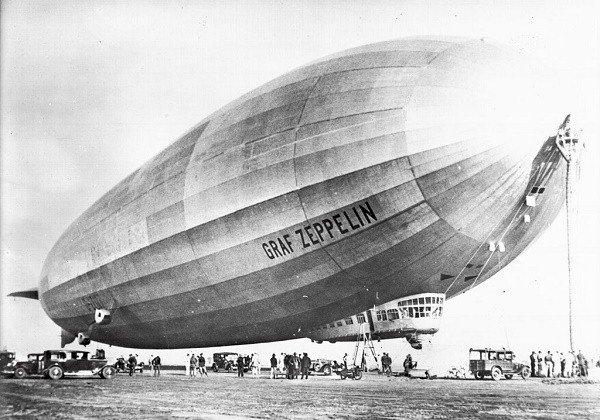 The Graf Zeppelin crossed the Atlantic many times as a passenger carrier.
It also circumnavigated the globe in 21 days in 1929.

The first non-stop flight around the world was made by, again, a team of the US Air Force flyers in 1949.

Taking off from Carswell Air Force base in Fort Worth, Texas on 26 February, Captain James Gallagher and a crew of 14 headed east in a B-50 Superfortress, called Lucky Lady II. They were refueled four times in air by KB-29 tanker planes of the 43rd Air Refueling Squadron, over the Azores, Saudi Arabia, the Philippines and Hawaii. 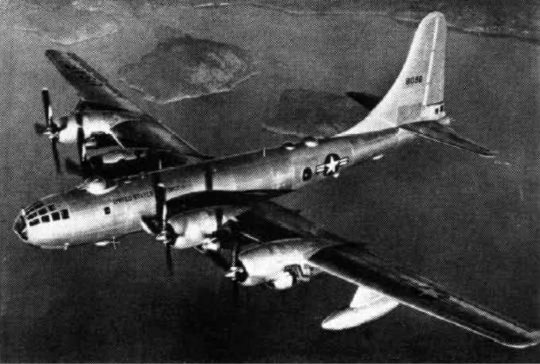 The next quest was to fly around the world, nonstop, non-refueling.

By 1986 designer Burt Rutan and pilots Dick Rutan and Jeana Yeager had devoted over five years to building and flight-testing the Voyager.

The canard wing design, or forward elevator, similar to that successfully used by the Wright brothers in 1903, provided additional lift and improved the plane’s efficiency and range. A preliminary sketch of the 1903 Wright Flyer was drawn on a brown paper bag in the Wrights’ living quarters in 1902. Coincidentally, the first sketch of the Voyager was made on a paper lunch napkin in 1980.

On 14 December 1986 Richard Rutan and Jeana Yeager took off from Edwards, California, piloting the Voyager from a cramped 2,3 m (7.5 ft) long, 1,1 m (3.3 ft) wide and 1m (3 ft) tall cockpit. Voyager’s takeoff weight was more than 10 times the structural weight, but its drag was lower than almost any other powered aircraft. Voyager’s wingtips sustained minor damage during its takeoff roll because of the massive amount of fuel. Approximately 75 cm (2.5 ft) of graphite skin was missing from the left wing’s foam core.

Traveling at an average speed of 185 km/h (115.8 mph), it took the Voyager 9 days, 3 minutes and 44 seconds to become the first aircraft to circumnavigate the globe nonstop, non- refueling. They triumphantly landed again at the Edwards Air Force Base at 8:06 a.m. PST 23 December 1986. 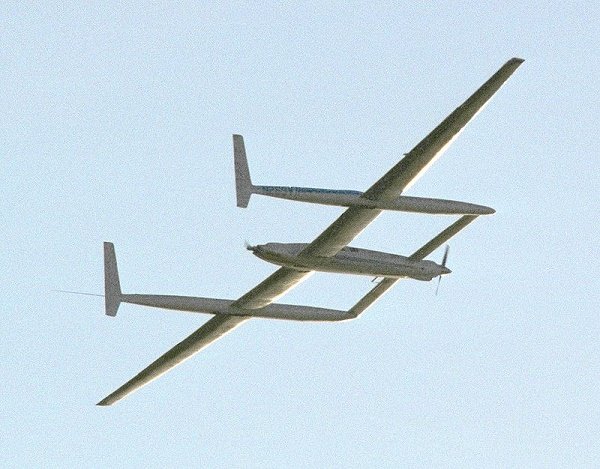 In 1964 Geraldine “Jerrie” Mock became the first woman to fly solo around the world. Her single-engine Cessna 180 was called the Spirit of Columbus. For more info, spread your wings toward the Smithsonian Museum’s Women in Aviation and Space. 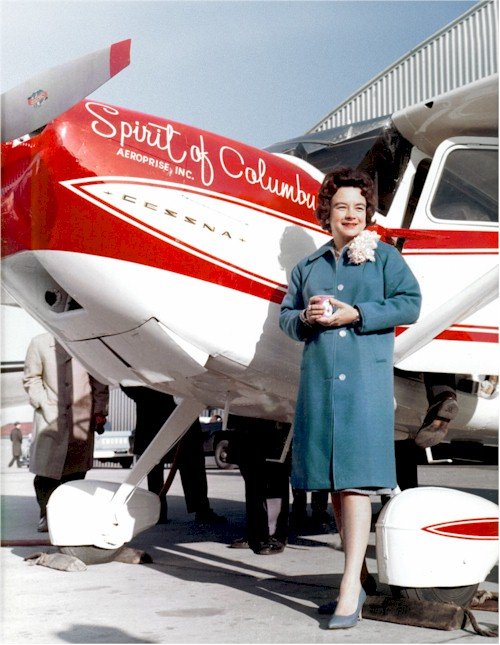 The first woman to earn a pilot’s license was French lady Raymonde de Laroche, who got hers on 8 March 1910. (By that time many women in Europe were flying, albeit without an official license.)

Later the same year, Blanche Scott became the first woman pilot in the USA when the plane that she was allowed to taxi suddenly became airborne.

The first in-flight refueling was tackled by the US Army Air Service on 25 June 1923. In August, lieutenants Lowell H. Smith and John P. Richter set a world’s record by staying aloft for 37 hours and 15 minutes in a DH-4 over San Diego with the help of refueling from another DH-4 (above). 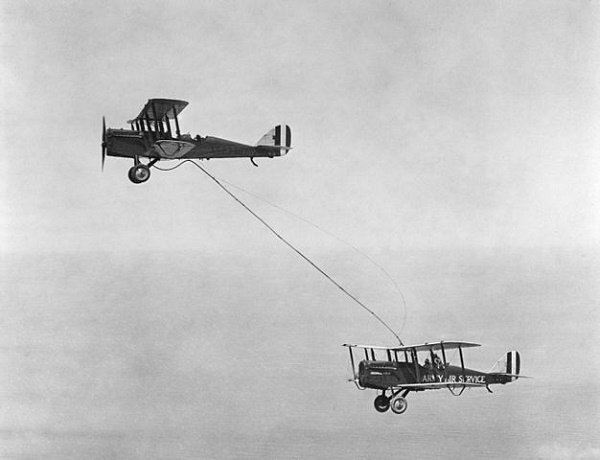 Thanks to Dave Lam for contributing to this page

Were the Wright Brother really the first to fly?