Home » sports » Surfing was once banned

Surfing was once banned

Surfing was noticed by Europeans for the first time in 1767 at Tahiti. In 1777, English discoverer Captain James Cook (1728 – 1779) wrote that he saw how inhabitants of the islands around Tahiti and Oahu were riding the waves on boards.

Later, when missionaries were sent to the islands they banned surfing because they thought it immoral. No explanation was given. But the sport of surfing would return soon. 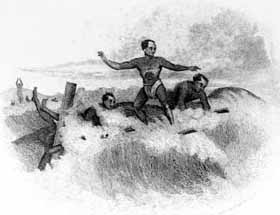 In 1866, Mark Twain visited Hawaii, noting, “In one place we came upon a large company of naked natives, of both sexes and all ages, amusing themselves with the national pastime of surf-bathing.” Note that he mentioned that just male and female adults and children surfed.

Surfing became popular worldwide after European and US soldiers who were posted on the Pacific islands took the sport home.

The above image represents an artistic impression of surfing in Hawaii. See the history of surfing at Surfing For Life. The latest international surfing news can be found at Surfing Magazine.