Mel Gibson’s blue and white make-up in Braveheart obviously are the colors of Scotland. Nobody knows when the Scots first painted their faces. The earliest known reference to the Scots was made by the Greek Pretanoi in 4BC and referred to a practice of painting or tattooing associated with the bluish dye known as woad.

But he probably referred to the Picts, the most northern tribes that the Romans referred to as Picti, which means “painted ones” in Latin. They held the Romans out of Scotland, creating the true north-south devide that still exists. 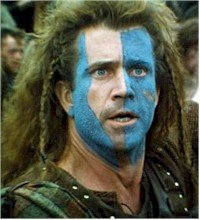 The Picts disappeared from history by the the end of the first millennium but could be called the first nation of Scotland.

The history of the Picts became overshadowed by that of the Gaels, another Celtic tribe. They were muscular, red-haired wanderers who probably descended from beyond the Caspian Sea. They actually had no name for their land of origin but their home in Scotland became the Kingdom of Alba, the Gaelic name officially used for Scotland.

Scotland still has the most red hair people in the world.

And, yes, they do paint their faces blue and white during sports events.