The Academy of Motion Picture Arts and Sciences was established in May 1927 as a non-profit corporation to promote the art of movie making. In the first year, the Academy had 36 members, with Douglas Fairbanks Sr as president.

The first Academy Awards, now better known as the Oscars, were presented at a private dinner in the Hollywood Roosevelt Hotel, with less than 250 persons attending.

Today, the Academy has over 6 000 honorary members – the Oscar Awards are viewed by more than a billion people on television.

The first television broadcast of the Oscars took place in 1953 – on black and white TV, telecasted throughout the US and Canada.

Telecasting in color begun in 1966, and since 1969, the Oscars have been telecast throughout the world. By the mid-1990s it was telecast in over 100 countries.

At the first Academy Awards, held in May 1929, Best Director awards went to Lewis Milestone for Two Arabian Knights and Frank Borzage for 7th Heaven.

The first award for Actor in a Leading Role went to Emil Jannings (real name Theodor Friedrich Emil Janenz) for his roles in The Last Command and The Way of All Flesh.

The first Best Actress award was won Janet Gaynor for her roles in 7th Heaven, Street Angel and Sunrise.

All those films were screened in 1927. Those were the days of the silent movies, thus WINGS was the only silent to have won a Best Picture Oscar. It also featured Gary Cooper in a minor role.

Swiss-born Jannings grew up in Germany and had a heavy German accent which, with the advent of sound in movies, basically put an end to his Hollywood movie career.

The most popular night in the world

The Academy Award ceremony basically was a non-public affair in 1927 and 1928. But it had created such public interest that the Oscar Presentation Night was introduced in 1929.

Since 1940 people have been kept on the edge of their seats with the familiar phrase “The envelope please.” 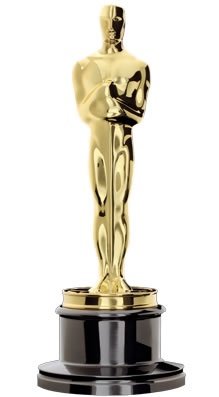 The record for most acting nominations without a single win is shared by Peter O’Toole and Richard Burton with seven. The most nominated actors for Best Actor and Best Supporting Roles are Jack Nicholson (11), Laurence Olivier (10), and Spencer Tracy (9). No male performer has yet won three Best Actor awards.

Anthony Quinn’s performance as painter Paul Gaugin in Lust for Life (1956) is the shortest ever to win a Best Supporting Actor Academy Award. He was on screen for only 8 minutes. Judi Dench made the an equally short performance, winning Supporting Actress for her portrayal of Elizabeth I in “Shakespeare in Love” (1999). More Oscar fast facts

In 1997, James Cameron’s Titanic received 11 Oscars, sharing the record of the most Oscars awards for a single film with William Wyler’s Ben Hur (1959). The closest runner-up is West Side Story with 10 Oscars in 1961.

The Hustons are the only family to produce three generations of Oscar winners: Walter Huston was named Best Supporting Actor in 1948 for his role in The Treasure of the Sierra Madre; John Huston was awarded Best Director/Adapted Screenplay for the same movie, and Anjelica Huston received an Oscar for Best Supporting Actress in Prizzi’s Honor, 1985.

Many actresses have won the Best Actress Oscar twice: