Jesuit priest Ferdinand Verbiest, who worked in China from 1659 until his death in 1688, left a description of a five-wheel steam car he had built as a toy for the young Chinese emperor Enkh Amgalan Khaan in 1672.

That is the earliest record of an auto-mobile car thus Verbiest’s vehicle possibly holds the very first land speed record.

The vehicle was not meant for human transport and was only 2 ft (65cm) long.

There is, however, no other record of the vehicle and it is not known if it was actually built. The graphic here is from an 18th century print. 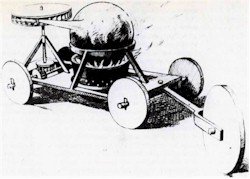 The first “modern” mechanically-propelled vehicle capable of transporting people and goods was invented by a French artillery officer Nicolas Joseph Cugnot. In 1769, he drove his steam tractor in the presence of the Duke of Choiseul in Paris at an impressive 2.5 miles per hour which many believe to be the first land speed record.

The first “official” world speed record – only later called the Land Speed Record – was set not in a car with a steam or internal combustion engine but in an electric car. In 1898, Frenchman Comte Gaston de Chasseloup-Laubat reached a speed of 39.24 mph (62,78 km/h) in his Jeantaud electric car.

If Thomas Edison had his way, all cars would have been electric. By 1909, his new battery was ready to power the automobiles of the future even though by this time almost 80% of cars were gasoline driven. But Edison was too late. Although gasoline cars were expensive, the gasoline itself cost a fraction of the price of electricity (much as today). And, in 1910, Henry Ford had made the internal combustion engine cheap enough so that the car was affordable to the average man. Electric cars would reach the headlines again only 80 years later.

In the meantime, for a while at least, the compressed air engine made its appearance. In 1921, a number of cars with air engine graced the road, running at the same speed of internal combustion cars, on average 35mph (56 km/h). But they could only run for 20 minutes before needing a top-up.

Compressed air engines didn’t disappear though. Between 1929 and 1931 Manhattan trolleys ran on air engines, filling up at the last stop base on either side of the route. This method is still in use for mining trolleys.

Recent development in air engines is lead by Frenchman Guy Negre, a former Formula One engineer. Negre’s cars are powered by internal combustion engines but runs on air instead of gasoline – although they can run on gasoline, diesel and other fuels as well. They reach around 60 mph (100km/h).