On the evening of 18 April 1775, Paul Revere was instructed to ride to Lexington, Massachusetts to warn Samuel Adams and John Hancock that British troops were marching to arrest them, and then ride on to Concord. Riding a horse that he borrowed from his friend Deacon John Larkin, he alarmed the countryside, stopping at each house, and reached Lexington at midnight.

After delivering the message, Revere was joined by William Dawes, who had been sent on the same errand by a different route. On route to their next destination, Concord, Massachusetts, where weapons and supplies were hidden, they were joined by Dr Samuel Prescott.

At 1am, they were arrested by a British patrol, but Prescott and Dawes managed to escape. Revere was released without a horse at 2am and returned to Lexington. 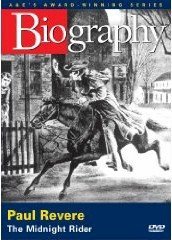 “While the information in his entry is correct, the title gives it a spin which is something of a distortion. As stated, the title suggests that Revere rode a certain distance and then gave up and went home. In fact, Revere was prevented from riding any further. He had already almost been captured just outside of Charlestown.

After he and Dr. Prescott (and Dawes, unless Dawes saw what was happening and skedaddled — Revere’s account doesn’t say) were halted on the road between Lexington and Concord, they were hearded down into a nearby meadow. Prescott said “put on!” which, meant, basically, scatter. Revere and Prescott rode quickly off in two different directions. Prescott, a local man, jumped his horse over a fence and escaped.

A Concord native, Prescott was able to make his way to Concord and warn the militia there. Revere headed in a different direction towards a section of woods, but ran into a group of British officers hiding there and was recaptured.

Thus, Revere escaped TWICE from British soldiers before he was finally corralled for good. An unarmed man, surrounded by a group of armed soldiers, there is little else he could have done.

After being interrogated for a while, Revere was eventually let go. His horse, however, was confiscated, so even if he wanted to continue on to Concord, he was prevented from doing so.

I would say Revere had a number of objectives on his express ride — warning Adams and Hancock, alarming the countryside, and warning the militia in Concord. He accomplished two out of three, and was prevented by superior force from accomplishing the third. Thus, to say he ‘never completed the journey’ seems to me to give the wrong spin.”