The coelacanth, or Latimeria chalumnae Smith, is one of the most interesting types of fish in the world. This primitive-looking fish was believed to have been extinct but was rediscovered in the 20th century.

In late 1938, a coelacanth was caught at the Chalumna River on the eastern part of South Africa. The crew that caught it thought it looked unusual they decided to consult a museum in the town of East London, South Africa for assistance with identifying it. It was identified as being the same as that of fossilized remains of a coelacanth.

The rediscovery of the coelacanth fish prompted the change in the scientific name of the fish. The name was created in honor of East London Museum director Marjorie Courtney-Latimer and the South African ichthyologist Dr. J.L.B. Smith. Smith was informed by Courtney-Latimer of this discovery.

The physical build of this fish makes it very unique. The vertebral column on the fish is not completely developed. It also has paired lobed fins that move like human limbs and an additional lobe on its tail. This makes the fish one that works with more functions than that of what a standard type of fish would deal with. 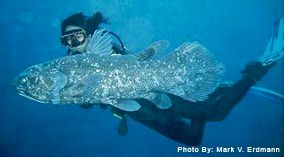 However, it is the inter-cranial joint on the fish that makes it even more unique. This joint is one that separates the ear and brain from the fish’s eyes and nasal organs. This works to allow the fish to lift its head up when swimming or feeding.

The coelacanth is a big fish

The interesting thing about this particular specimen is that locals were familiar with it at the time. It was referred to as the raja laut or the “king of the sea.” It is not clear as to how long these people were familiar with coelacanth.

In 2003, the Institute of Marine Sciences in Zanzibar worked alongside the African Coelacanth Ecosystem Programme to work towards protection of this fish. In the same year a coelacanth was found in Songo Mnara in the southern section of the country. Since, more than 30 have been found in the area. Another was found in Nungwi, Zanzibar, Tanzania in 2007.

The existence of coelacanth fossils over the years has been well documented. The fish has been believed to have existed in a number of forms since the days when the dinosaurs existed. Fossils have predominantly been found in areas where fossil formation can be easily handled, such as caves and overhangs located around vertical marine reefs. These include areas located around newly formed islands that were created by volcanoes.

It was also believed before the rediscovery of the coelacanth that they were ancestors of tetrapods (four-legged animals). However, further studies have found that the lungfish may be a closer match to the coelacanth.