Home » marine » Sharks are immune to almost all known diseases

Sharks are immune to almost all known diseases

Sharks are the only animals that almost never get sick: they are immune to almost every known disease.

Their body frames are not made up of bones – they are made of cartilage, the tough, fibrous tissue that shapes our noses and ears. Instead of scales shark skins have small tooth-like spikes that are so sharp that shark skin has long been used as sandpaper.

It is thought that some types of big sharks, including the Great White, change sex when they reach a certain size: males become females to ensure survival of their species.

Although sharks are one of the most feared animals – the fear of sharks is called galeophobia – fatal attacks on humans are fairly rare in comparison to many other incidents. Fatal attacks by dogs outnumber sharks ten and more times per year and you are 50 times more likely to be hit by lightning. A shark attack comparison by PressExposure reads like this: 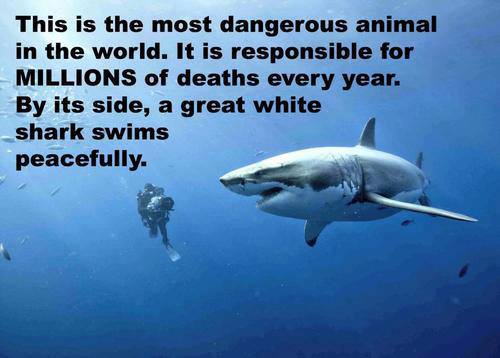 For more about the real facts on sharks, see SharkWater