Fascinating facts about the hippo

The hippo’s yawn is not a sign of sleepiness or boredom but is actually a threat gesture, displaying long, thick, razor-sharp canine teeth, or tusks, with which it is capable of biting a small boat in half. Being fearlessly protective of their turf and young, hippos have killed hundreds of people in Africa – more than any other wild animal.

Hippopotamus amphibius means “river horse.” The hippo, weighing 1 800 kg (4,000 pounds) and more, lives in Africa, south of the Sahara and along the length of the Nile river, although its range once included Asia and large parts of Europe.

18% of of a hippo’s weight is made up by its 5 cm (2 in) skin. Interestingly, beneath the hide is a relatively thin layer of fat.

Hippos prefer rivers with deep water and nearby reed beds and grasslands, but are also found in salt-water areas near river mouths, and in lakes in Central Africa. They are hoofed vegetarians, feeding on grass, fallen fruit, and occasionally on cultivated crops such as sugar cane or corn during the night. They spend most of the day in the water. 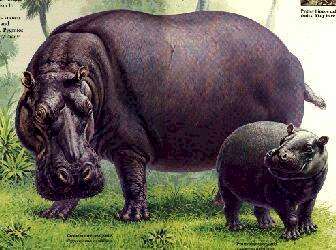 Although not part of the Big Five, the hippo is the third biggest land animal, slightly smaller but heavier than a white rhino (the elephant is the biggest).

In spite of its huge size – 3 metres (12 feet) in length, 1,5 metres (five feet) tall, with a mouth measuring a half metre (two feet) across – the hippopotamus can outrun a human.

The bellowing of a bull hippo measures an ear-splitting 115 decibels, sounding like the roar of a lion. (The blue whale is the loudest animal, calling out at up to 188 decibels.)

Nearly all of the famous African explorers and hunters – Livingstone, Stanley, Burton, Selous, Speke, DuChaillu – had boating mishaps with hippos. All considered the hippo to be a wantonly malicious beast. Spencer Tyron, a hunter, was killed while hunting near the shores of Lake Rukwa, Tanzania. A bull hippo turned over the dugout canoe from which Tyron was shooting, and bit off his head and shoulders.

The tusk-like incisors and canines grow continuously. They are ivory, valued even more highly than an elephant’s because they do not turn yellow with age. George Washington’s false teeth were not made of wood, as is commonly believed, but were carved from the tusks of a hippopotamus.

The ears and nostrils – located at the top of the head – close automatically when the animal is under water. It has practically no hair, and its smooth skin is quite delicate. The hippo’s skin exudes a red, oily liquid that keeps the skin moist and protected when it is out of water. The liquid has lead to a myth that the hippo sweats blood.

One young is born at a time, after a gestation of around 230 days. Births usually occur in months of heavy rainfall, but can occur year-round. Young hippos will also bask on their mother’s back.

Recent DNA evidence suggests that the hippopotamus is more closely related to cetaceans (whales and dolphins) than it is to any other artiodactyl (even-toed hoofed mammal).

A group of hippos is called a “bloat.” See more collective nouns of animals.