Jean Harlow was the first actress to appear on the cover of Life magazine, May 1937.

Mary Katherine Campbell was the only woman to win the Miss America title twice, 1922 and 1923.

Queen Isabella of Castile, who dispatched Christopher Columbus to find the Americas, boasted that she had only two baths in her life – at her birth and before she got married.

Cleopatra’s last name was Ptolemy, and she was Greek rather than Egyptian.

The people killed most often during bank robberies are the robbers.

The oldest person on record is Methuselah (969 years old). 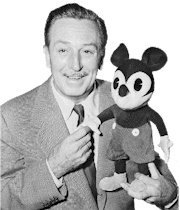 Walt Disney, the creator of Mickey Mouse, was afraid of mice.

Adriaan van der Donck was the first and only lawyer in New York City in 1653.

Burt Reynold’s father was the chief of police in West Palm Beach, Florida.

Before writing 007 novels, Ian Fleming studied languages at Munich and Geneva universities, worked with Reuters in Moscow, and then became a banker and stockbroker.

Until he was 18, Woody Allen read virtually nothing but comic books but did show his writing skills. He sold one-liners for ten cents each to gossip columnists.

Orville Wright numbered the eggs that his chickens produced so he could eat them in the order they were laid.

Julius Caesar was known as a great swimmer.

Dr. Samuel A. Mudd was the physician who set the leg of Lincoln’s assassin John Wilkes Booth… and whose shame created the expression for ignominy, “His name is Mudd.”

Sir Isaac Newton was an ordained priest in the Church of England.

Both Hitler and Napoleon were missing one testicle.

Joseph Stalin’s left foot had webbed toes and his left arm was noticably shorter than his right.

Although he is often referred to as the “little corporal” Napoleon was of average height. 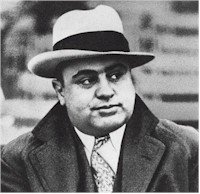 Al Capone’s business card stated that he was a used furniture dealer.

Al Capone died in prison from syphillis – despite being the first sufferer to be treated with antibiotics.

Samuel Clemens aka Mark Twain smoked forty cigars a day for the last years of his life.

Elizabeth Bacon Custer, wife of “The Boy General” is one of the few women buried at the US Military academy at West Point, New York.

Betsy Ross, who sew the first American flag, ran a munitions factory in her basement. Apparently she was born with a fully formed set of teeth.

American composer Charles Ives spent much of his time and money advocating an amendment to the US Constitution that would prevent any US citizen from earning more than $20,000 per year. Pulitzer Prize winning Ives earned much more than that. When Alexander Graham Bell passed away in 1922, every telephone served by the Bell system in the USA and Canada was silent for one minute.

Alexander Graham Bell never phoned his wife or mother because they were deaf.

King George I of England did not speak English.

Anne Boleyn had six fingernails on one hand.

Elizabeth I of England suffered from anthophobia, a fear of roses.

The German Kaiser Wilhelm II had a withered arm and often hid the fact by posing with his hand resting on a sword or by holding gloves.

The British royal family changed their surname (last name) from Saxe-Coburg-Gotha to Windsor, the name of their castle, in 1917.

A Duke is the highest rank you can achieve without being a king or a prince.

There are about 5,000 prince and princesses in each Saudi Arabian royal.

Thomas Jefferson wrote his own epitaph without mentioning that he was US President.

Charlie Brown’s father was a barber.

Winston Churchill, Franklin Delano Roosevelt, Theodore Roosevelt and Eleanor Roosevelt were all cousins through one connection or another. (FDR and Eleanor were about five times removed.)

Winston Churchill was born in a ladies’ room during a dance.

Leonardo da Vinci could write with the one hand and draw with the other simultaneously.

Residents of the island of Lesbos, Greece are Lesbosians, rather than Lesbians.

A person from Glasgow, is called a Glaswegian.

A person from the country of Nauru is called a Nauruan; this is the only palindromic nationality.

The native tribe of Tierra del Fuego has a language so guttural it cannot have an alphabet.

There are almost twice as many people in Rhode Island than there are in Alaska.

If you were born in Los Alamos, New Mexico during the Manhattan project (when the first atomic bomb was made), your birthplace would have been listed as a post office box in Albuquerque.

A law in Iceland dating to 1615 requires citizens to shoot a Basque on sight. The law was repealed only in 2014.

Next to Warsaw, Chicago has the largest Polish population in the world.

A Russian man who wore a beard during the time of Peter the Great had to pay a special tax.

About 3000 years ago, most Egyptians died by the time they were 37.

Genghis Khan started out life as a goatherder.

French mime artist Marcel Marceau was Jewish, died on Yom Kippur several years ago and taught Michael Jackson how to mime in the early 1980’s.

Britney Spears used to book into hotels as “Allota Warmheart.”

Warren Beatty and Shirley MacLaine are brother and sister.

Alfred Hitchcock didn’t have a belly button. It was eliminated when he was sewn up after surgery.

Atilla the hun was a dwarf.

Bob Hope and Billy Joel were both once boxers.

Warren Beatty once worked as a rat-catcher.

Drew Carey once worked at a Denny’s.

Harrison Ford has a species of spider named after him.

Elvis Presley got a C in his eighth grade music class.

Billionaire Howard Hughes stored his own urine in large bottles.

Albert Einstein was offered the presidency of Israel in 1952 but he declined.

In 1980, the city of Detroit presented Saddam Hussein with a key to the city.

According to studies, men change their minds two to three times more often than women.

Alexander the Great and Julius Caesar were both epileptic.

Telly Savalas and Louis Armstrong died on their birthdays.

Approximately 70,000 people in the US are both blind and deaf.

Merit-Ptah (2700 BC) of Ancient Egypt is the world’s first known female physician.

Florence Nightingale was a statistical genius and is credited with inventing the pie chart.

In 1973, Swedish confectionery salesman Roland Ohisson was buried in a coffin made entirely of chocolate.

On 5th October 1974, four years, three months and sixteen days after Dave Kunste set out from Minnesota, he became the first man to walk around the world, having taken more than 20 million steps.

Winston Churchill was a stutterer. As a child, one of his teachers warned, “Because of his stuttering he should be discouraged from following in his father’s political footsteps.”

Amnesty International never took on Nelson Mandela’s case because they did not think him a political prisoner. He pleaded guilty to 156 acts of public violence and terrorism. At the time of his arrest in 1962, according to the Spectator, Mandela was a member of the South African Communist Party’s innermost central committee. As stern supporter of the Palistinian cause, he never acknowledged Israel.

The US has the highest documented per capita rate of imprisonment of any country in the world. About 2% of white males, 4% of Hispanic males and 10% of black males are incarcerated. There are more black males in prison than in colleges in the US.

About 1 in 30 people in the US are in jail, on probation, or on parole.

Half of all identity thieves are either relatives, friends, or neighbors of their victims.

Annually, approximately 250,000 American husbands are physically attacked and beaten by their wives.

In the year 2000, Pope John Paul II was named an “Honorary Harlem Globetrotter.”

Children laugh about 400 times a day, while adults laugh on average only 15 times a day.